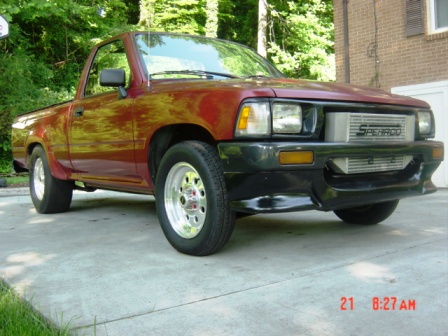 Any questions? Email Me

One of my projects is a 1992 Toyota pickup truck. The factory 22RE four cylinder has been replaced with a 1989 Toyota Supra 7MGTE turbo engine. It is an inline 6 cylinder with double overhead cams and 4 valves per cylinder.  Some of the mods to the engine include .020 over JE forged pistons, ARP heads studs, main studs, and rod bolts. The entire bottom end of the engine was balanced. Blown head gaskets are a common problem to the 7MGTE engine so a metal HKS head gasket was used. The block and the cylinder head were surfaced to ensure that the metal head gasket sealed properly. The cylinder head was also treated to a 3 angle valve job and a professional port and polish job with the ports being matched to the gaskets. 7MGE non-turbo cams were used which are good for approximately 10 hp over the turbo cams. A large Spearco bar and plate intercooler with mandrel bent 2 1/2" intercooler piping, silicone connectors with stainless T-bolt clamps, HKS air filter, and full 3" exhaust with a Hooker Aero chamber muffler rounds out the intake and exhaust.

Some of the parts needed for the swap included the Supra radiator. It is a lot larger than the 22R radiator and is needed to prevent the engine from overheating. Also, because the Supra engine is approximately 4" longer than the 22R, I was unable to use the mechanical fan on the water pump. I substituted a 14" thermostatically controlled electric fan sandwiched between the radiator and the intercooler. I have installed a toggle switch override for racing to pull cool air through the intercooler. The motor mounts are stock 22R mated to the engine brackets from a MKII Supra. The oil pan was notched to clear the tie rod and the brake booster was modified to clear the intake. I originally started with a W58 5-speed transmission from an 85 Supra. The W58 transmission was designed for an engine with approximately 150 hp and held up great until meeting it's demise at the drag strip.. Physically, it is the same size as the 22R 5-speed with the only difference being the shifter sits about 3" further back. This necessitated that the trans tunnel be trimmed to clear the new shifter.  I made the mistake of using a stock clutch to begin with. It slipped from day one and lasted less than a week. It was promptly returned to Auto Zone and  has since been replaced with a Clutchmasters Stage IV racing clutch. The truck now has an R154 5-speed transmission from a 92 Turbo Supra. It is built a lot stronger and will hold much more power. I went with a Spec Stage III clutch this time around. It is a lot smoother and more streetable then the Clutchmaster was.

The fuel system has been upgraded with a Walbro electric fuel pump, Aeromotive adjustable fuel pressure regulator, Earl's braided stainless -6AN lines, and a Lexus LS400 V8 air flow meter. Without these mods, the computer shuts down the engine momentarily due to overboost. The stock CT-26 turbocharger was upgraded by Performance Techniques and uses TO4E 60 trim internals and a JBLMK3 long radius turbo elbow which replaces the stock restrictive elbow. The new turbo alone has made more difference than all the other mods combined. I'm currently running 12 lbs. of boost until the engine is fully broken in. I've been told by others with this same turbo setup that it doesn't really come alive until about 15 lbs. and maxes out at a little over 20. I will post some  time slips and videos once I return to Bristol Dragway in the spring.

Early testing proved that low vehicle weight (2800 lbs.) along with over triple the horsepower of the 22r makes for no traction in the first three gears. So, the search began for a limited slip differential for the stock 7.5" rear with zero success. At the time, it seemed the only option I had was to find an 8" rear from a 4wd Toyota truck. The only problem with this was that the 4wd trucks used 6 lug wheels. After more searching, I found that 3/4 and 1 ton Toyota trucks used the same 8" rear and had a 5 lug bolt pattern. Luckily, I was able to pick one up at a local salvage yard and then ordered an Aussie Locker to complete the setup. The rearend was a direct swap with the exception of the third member on the 8" being about an inch longer which required that the driveshaft be shortened. Drag shocks are used front and rear and the overload springs have been removed to soften the rear suspension and enable the truck to launch better at the strip.

Full boost at anything below 60 mph still produces severe wheelspin. Without touching the clutch, it will break traction when coming on boost in third gear with 275/60/15 street tires. When drag racing, I use 28 X 11.50 Mickey Thompson ET Streets. These are basically soft compound racing slicks with grooves to meet D.O.T. approval. With these tires it hooks up very well. It is a blast to drive and has surprised several V8 "musclecar" owners. With the old engine and stock turbo at 18 lbs of boost, I was able to run low 12s in the quarter. This was with cylinder no. 6 only having 90 lbs. of compression due to a leaking head gasket.

February 2004 I finally made it to my local dyno for a few pulls. Due to some problems with my new boost controller, I wasn't able to boost more than 16 lbs. I still managed to pull 380 hp and haven't even started any major tuning yet. All in all, I am pretty happy with the results. My next trip I hope to have the boost issue corrected and should easily be over 400 hp. See the dyno graph below. Nice flat torque curve!

Time slip for that run